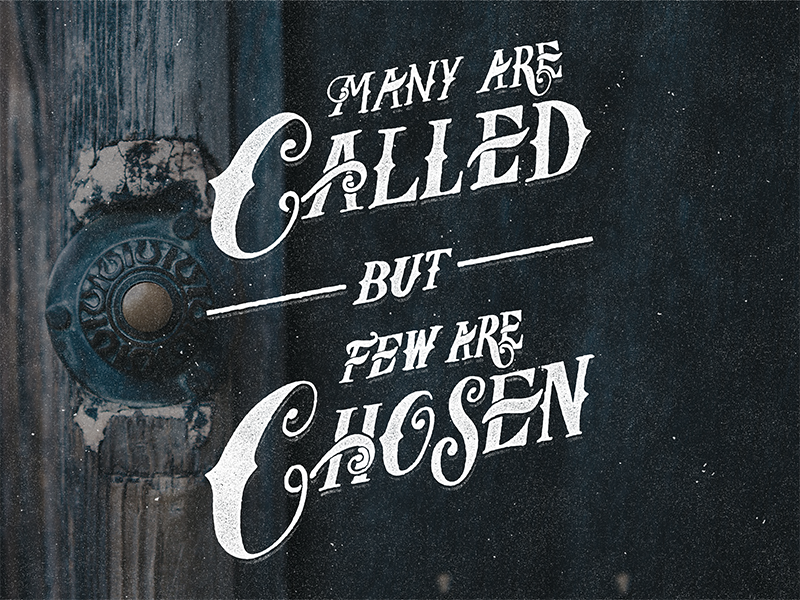 Answer: This statement is the conclusion to the Parable of the Wedding Feast. Jesus spoke this parable to show what the kingdom of heaven will be like when the end of the age comes. In the parable, the king sends his servants out to gather the wedding guests to the wedding feast. But those invited refused to come, some because they were too busy with their own worldly pursuits and some because they were positively hostile toward the king. So the king commands his servants to go out and invite anyone they find, and many come and fill the wedding hall. But the king sees one man without wedding clothes, and he sends him away. Jesus concludes by saying that many are called/invited to the kingdom, but only those who have been “chosen” and have received Christ will come. Those who try to come without the covering of the blood of Christ for their sins are inadequately clothed and will be sent into “outer darkness,” (v. 13) i.e., hell.

Many people hear the call of God which comes through His revelation of Himself through two things—the creation and the conscience within us. But only the “few” will respond because they are the ones who are truly hearing. Jesus said many times, “He who has ears to hear, let him hear” (Matthew 11:15; Mark 4:9; Luke 8:8, 14:35). The point is that everyone has ears, but only a few are listening and responding. Not everyone who hears the gospel receives it but only the “few” who have ears to hear. The “many” hear, but there is no interest or there is outright antagonism toward God. Many are called or invited into the kingdom, but none are able to come on their own. God must draw the hearts of those who come; otherwise they will not (John 6:44).

Second Corinthians 5:17 says, “Therefore, if anyone is in Christ, he is a new creation; the old has gone, the new has come.” God creates life, grants repentance and gives faith. Man is totally unable by himself to do these things which are necessary to enter the kingdom of heaven. Ephesians 1:4-6: “For he chose us in him before the creation of the world to be holy and blameless in his sight. In love he predestined us to be adopted as his sons through Jesus Christ, in accordance with his pleasure and will—to the praise of his glorious grace, which he has freely given us in the One he loves.” Salvation is by God’s will and pleasure for His glory. John 6:37-39, 44-45: “All that the Father gives me will come to me, and whoever comes to me I will never drive away. For I have come down from heaven not to do my will but to do the will of him who sent me. And this is the will of him who sent me, that I shall lose none of all that he has given me, but raise them up at the last day…No one can come to me unless the Father who sent me draws him, and I will raise him up at the last day. It is written in the Prophets: ‘They will all be taught by God.’ Everyone who listens to the Father and learns from him comes to me.”

So, all of God’s “chosen” will be saved without exception; they will hear and respond because they have spiritual ears to hear the truth. God’s power makes this certain. Romans 8:28-30: “And we know that in all things God works for the good of those who love him, who have been called according to his purpose. For those God foreknew (loved) he also predestined to be conformed to the likeness of his Son, that he might be the firstborn among many brothers. And those he predestined, he also called; those he called, he also justified; those he justified, he also glorified.”

How do we know if we are among the few that have ears to hear? By responding to the call. Assurance of this certain call, this chosen call, is from the Holy Spirit. Consider Philippians 1:6, which says, “Being confident of this, that he who began a good work in you will carry it on to completion until the day of Christ Jesus.” “Therefore, my dear friends, as you have always obeyed—not only in my presence, but now much more in my absence—continue to work out your salvation with fear and trembling, for it is God who works in you to will and to act according to his good purpose” (Philippians 2:12-13.) If we listen with our spiritual ears and respond to the invitation, there will be fear and trembling in our souls as we recognize that it was God’s work in us that caused our salvation.