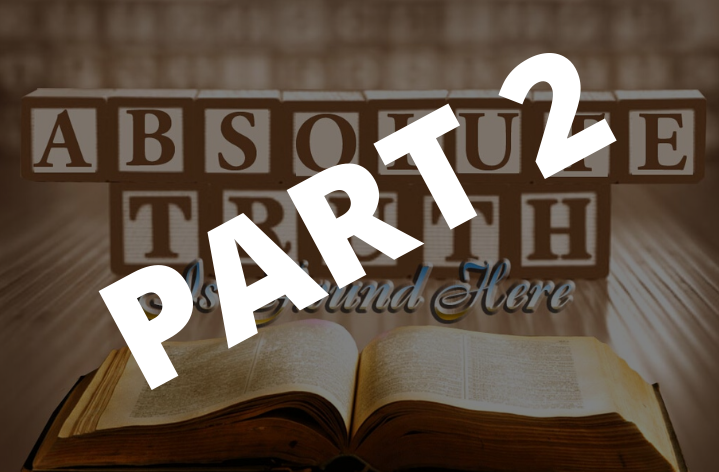 Answer: Those who deny absolute truth will often say that it is all right to believe what you want, as long as you do not try to impose your beliefs on others. But this view itself is a belief about what is right and wrong, and those who hold this view most definitely do try to impose it on others. They set up a standard of behavior which they insist others follow, thereby violating the very thing they claim to uphold— another self-contradicting position. Those who hold such a belief simply do not want to be accountable for their actions. If there is absolute truth, then there are absolute standards of right and wrong, and we are accountable to those standards. This accountability is what people are really rejecting when they reject absolute truth.

The denial of absolute truth/universal truth and the cultural relativism that comes with it are the logical result of a society that has embraced the theory of evolution as the explanation for life. If naturalistic evolution is true, then life has no meaning, we have no purpose, and there cannot be any absolute right or wrong. Man is then free to live as he pleases and is accountable to no one for his actions. Yet no matter how much sinful men deny the existence of God and absolute truth, they still will someday stand before Him in judgment. The Bible declares that “…what may be known about God is plain to them, because God has made it plain to them. For since the creation of the world God’s invisible qualities—his eternal power and divine nature—have been clearly seen, being understood from what has been made, so that men are without excuse. For although they knew God, they neither glorified him as God nor gave thanks to him, but their thinking became futile and their foolish hearts were darkened. Although they claimed to be wise, they became fools” (Romans 1:19-22).

Is there any evidence for the existence of absolute truth? Yes. First, there is the human conscience, that certain “something” within us that tells us the world should be a certain way, that some things are right and some are wrong. Our conscience convinces us there is something wrong with suffering, starvation, rape, pain, and evil, and it makes us aware that love, generosity, compassion, and peace are positive things for which we should strive. This is universally true in all cultures in all times. The Bible describes the role of the human conscience in Romans 2:14-16: “Indeed, when Gentiles, who do not have the law, do by nature things required by the law, they are a law for themselves, even though they do not have the law, since they show that the requirements of the law are written on their hearts, their consciences also bearing witness, and their thoughts now accusing, now even defending them. This will take place on the day when God will judge men’s secrets through Jesus Christ, as my gospel declares.”

The second evidence for the existence of absolute truth is science. Science is simply the pursuit of knowledge, the study of what we know and the quest to know more. Therefore, all scientific study must by necessity be founded upon the belief that there are objective realities existing in the world and these realities can be discovered and proven. Without absolutes, what would there be to study? How could one know that the findings of science are real? In fact, the very laws of science are founded on the existence of absolute truth.

The third evidence for the existence of absolute truth/universal truth is religion. All the religions of the world attempt to give meaning and definition to life. They are born out of mankind’s desire for something more than simple existence. Through religion, humans seek God, hope for the future, forgiveness of sins, peace in the midst of struggle, and answers to our deepest questions. Religion is really evidence that mankind is more than just a highly evolved animal. It is evidence of a higher purpose and of the existence of a personal and purposeful Creator who implanted in man the desire to know Him. And if there is indeed a Creator, then He becomes the standard for absolute truth, and it is His authority that establishes that truth.

Fortunately, there is such a Creator, and He has revealed His truth to us through His Word, the Bible. Knowing absolute truth/universal truth is only possible through a personal relationship with the One who claims to be the Truth—Jesus Christ. Jesus claimed to be the only way, the only truth, the only life and the only path to God (John 14:6). The fact that absolute truth does exist points us to the truth that there is a sovereign God who created the heavens and the earth and who has revealed Himself to us in order that we might know Him personally through His Son Jesus Christ. That is the absolute truth.