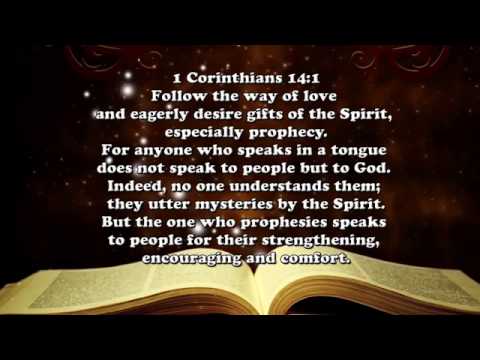 Answer: First Corinthians 13:8–10: “Love never fails. But where there are prophecies, they will cease; where there are tongues, they will be stilled; where there is knowledge, it will pass away. For we know in part and we prophesy in part, but when completeness comes, what is in part disappears.” In the KJV, the tongues “will cease.” In other words, at some point after Paul wrote 1 Corinthians, the gift of tongues would no longer be in use.

First Corinthians 12–14 is all about the proper use of spiritual gifts. Paul writes to the Corinthian church to correct the improper use of some gifts and the improper emphasis they put on certain of the more “spectacular” gifts. Right in the middle of his discussion, he speaks about the superior quality of love. Even though the Corinthian church was very gifted, they were not using their gifts in love for each other. Paul goes on to say that all of the various gifts will one day cease to function, but love will never fail. The question that many struggle with is just when these gifts will cease. Paul gives the answer in the text: “when completeness comes” (1 Corinthians 13:10).

The next question, of course, is what is the “completeness” or “the perfect” (NASB)? Essentially, there are two views:

One view, often called the “cessationist” view, is that the sign gifts were only in operation during the apostolic era to give special revelation until the completion of the New Testament. Before early Christians had the whole New Testament, they had to rely on words of knowledge, prophecy, and tongues to give them the full revelation of God. Once the church had possession of the full New Testament (the completeness), these gifts faded away as unnecessary. Faith, hope, and love continue to be in operation.

Often, the cessationist view will point out that the words used for the cessation of knowledge and prophecy are in the passive voice, indicating that they will be stopped by an outside force. However, the verb used for the cessation of tongues is in the middle voice, which indicates that they will cease “of themselves.” This is usually seen as further proof that tongues were temporary and would eventually pass away on their own. Regardless of the strength of this argument, the grammatical analysis leaves something out. Some verbs normally take the middle voice, and the verb translated “be stilled” in the NIV is one of them; therefore, there is no particular significance to the change from passive to middle voice in this passage. In Luke 8:24 the storm is “stilled” (same word and voice); however, it is clear that Jesus actively stilled the storm.

Cessationists also point out that, if tongues, prophecy, and knowledge continue, this continuing revelation would in effect be adding to Scripture. However, most continuationists (who hold to the current exercise of these gifts) do not view their revelations as being on par with Scripture but more like the “leading of the Spirit.” Many cessationists feel God led them to do something or “told” them to do something. They would maintain that this was some sort of communication from God but would never place it on par with Scripture.

The other primary view is that the “completeness” is the eternal state. At that time there will be no more need for the miraculous gifts such as tongues because we will know everything fully. This view points to verse 12 as further describing the “completeness”: “For now we see only a reflection as in a mirror; then we shall see face to face. Now I know in part; then I shall know fully, even as I am fully known.” This can hardly refer to the completion of the New Testament canon. Paul’s point seems to be that tongues, prophecy, and words of knowledge will be unnecessary when we enter the eternal state.

The continuationist position does not preclude the possibility that the need for the more miraculous gifts might ebb and flow according to the need or wane with the completion of the canon; rather, it simply does not clearly state that these gifts will stop when the canon is complete. There are good historical and theological arguments for the cessationist position, but they are not necessarily supported by 1 Corinthians 13:8. Likewise, the verse cannot be used as an endorsement of any and all claims of continuationists today. Paul spends three chapters on the misuse of the sign gifts, and many of the same abuses are committed today by those who claim to exercise tongues.